To protect, promote and improve the health of our community 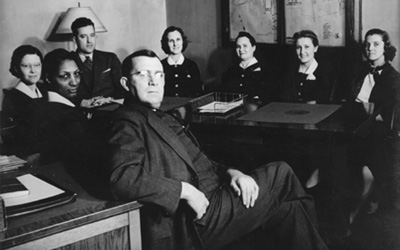 The original office of the Madison County Health Department was located on the second floor of the Federal Building.  Staff consisted of only a Health Officer and two nurses.  City and County governments and private physicians were very cooperative.  By 1931, a Sanitary Disposal Ordinance had been enacted by the City of Richmond, and the health department and private physicians had agreements for referrals and the sharing of diagnostic equipment.

The director was instructed to set up an office in line with the public health and preventive medicine procedures outlined by the Kentucky State Board of Health.  This included immunization against typhoid, diphtheria, scarlet fever, and smallpox.  Maternal and child welfare, diagnosis of tuberculosis, routine school examinations of children, and the identification of and referral for physical or dental defects all played a large role in the original program.

The Madison County Health Department was also charged with developing a sanitary program that fit the needs of both rural and urban homes and with establishing “indigent venereal clinics” for the treatment of syphilis and other STD’s.

Activities also included a “survey” of the county, which would be very similar to today’s community health assessments, and a PR campaign to increase the public’s awareness of the role of public health in Madison County.  In 1934, the health department made a two-reel motion picture of its activities and held many viewings throughout the county.  Also in 1934, the health department sponsored week-long dental clinics and tonsil clinics for indigent children throughout the year.  That year, Richmond was the only Kentucky town awarded honorable mention in the Health Conservation Contest conducted jointly by the U.S. Chamber of Commerce and the American Public Health Association.

The program that we now call Community Health Education was simply termed “Education” in 1934, but it was certainly a thorough endeavor.  The program had “spacious publicity” in the local newspapers; businesses granted the use of show windows for health displays; ministers announced health activities from their pulpits; college instructors and city and county teachers cooperated to stress health education.

Sanitation, which we now call Environmental Services, was the largest component of early Health Department work.  The sanitary inspector devoted his time to overseeing the construction of “sanitary toilets,” and to conducting inspections of private homes, water supplies, dairies, food-handling establishments, and other public places.  In 1934, Thomas D. Stevens was the Sanitary Inspector, and he conducted over 1,400 inspections over the course of the year.

The following is a quote from the 1934 Annual Report of Madison County Health Department:

“It must be mentioned that the idea of a good water supply has been in the minds of many people in most towns and villages for some times, but they have paid very little attention to waste disposal.  The basic principle is to dispose of sewage as speedily as possible with the least nuisance of the smallest number of people, with the least damage to health or property, at a reasonable cost.  It is indeed amazing to notice that sanitary disposal of waste is now in the minds of many.  There is hopes for a new disposal system at Richmond in the near future.”

Dairy Inspections, which are no longer a function of Environmental Services, was also a very important component of the original Sanitation program.  The inspector educated dairymen on milking and animal husbandry practices that would ensure safer milk.  He also educated the public to choose Grade “A” milk from dairies that had passes inspections.

The following is excerpted from the 1934 Annual Report’s section on Prenatal and Preschool:

“This is the ideal for the future of motherhood in this county; adequate prenatal, natal, and post natal care by the family physician.  A mother’s place may not be substituted by a guardian, school, orphanage, or institution of any kind, as motherhood is a profession calling for high qualities and conception of this difficult task.”

The School Hygiene program followed the State Board of Health’s guidelines for inspecting teeth, tonsils, eyes, posture, weight, and immunization status.  It also included short health talks that emphasized the importance of personal hygiene.  Children who were found to have physical problems were referred on to local physicians or to agencies such as the Shiner’s Hospital for Crippled Children in Lexington.

In 1934, the health department documented 27 known deaths from tuberculosis in Madison County and stated that the control of tuberculosis was “undoubtedly one of the most important problems the Madison County Health Department has to contend with at this present time.”  Throughout the 1930’s, the health department used Christmas Seal Sales to raise funds for the tuberculosis program.  Funding was used to pay for x-rays, cod liver oil, sputum cups, milk, linens, medical supplies, educational materials, and “fresh air cabins.”

By 1934, the Typhoid Fever case rate was beginning to decline.  Dr. Rountree reported that this was due in large part to better sanitation practices, more attention to a pure water supply, and a large number of typhoid immunizations.  The epidemiological approaches we employ today differ very little from those originally put into practice in 1929.  Investigation, quarantine, and other preventive measures were applied to the communicable diseases of the day.

The MCHD continued to respond to the public health needs of Madison County throughout the years.  The clinic moved to the basement of City Hall (the old Post Office quarters) and then to the Telford Building on Hallie Irvin Street.  Environmental Services was located on the third floor of the Miller Building, at 105 North 5th Street.  This building had originally been the home of Gibson Hospital.

In 1968, the City of Richmond deeded a parcel of land on Boggs Lane to the Board of Health.  The MCHD clinic moved to its home on Boggs Lane in 1969.  The original space, which is now the “back” section of our clinic building, consisted of a lobby, clerical area, and nine office/exam areas.  WIC services were added in 1976.

In 1974, MEPCO Home Health Services formed as a satellite of Lexington-Fayette County Health Department’s home health program. At this time, there were no other home health agencies in Madison, Estill, or Powell counties.  In 1976, Madison County Health Department took over the Certificated of Need for MEPCO. MEPCO’s offices were originally at 105 North 5th Street. In 1984-85, the Estill County office was opened. In 1989, MEPCO and Environmental Services moved to Boggs Lane following the clinic expansion. Powell County opened a free standing MEPCO office in 1994-95.

Berea’s MEPCO office and clinic were originally located in “The Hole,” in the basement of Berea Hospital.  They both moved to the offices on Richmond Rd (Hwy 25 North) in 1994.  MEPCO’s Richmond office moved from Boggs Lane to the Pattie A. Clay Annex in 1998.  From there, they shuffled briefly to Harper’s Square in 2001, and came to rest in December 2001 at the new building on Boggs Lane.

In 2000, MEPCO Home Health received JCAHO Accreditation.  This was an arduous process that required the commitment of all MEPCO staff, and some good help from MCHD’s Accounting & Personnel Office as well.   MEPCO is currently the only health department-managed home health agency in the state of Kentucky with JCAHO Accreditation.

Also in 2000, MCHD began a construction and renovation phase that lasted three years.  When the dust settled, the Richmond clinic had been expanded to allow for more seating and greater privacy in the lobby, a second building had been constructed on Boggs Lane for Environmental Services, MEPCO Home Health, and Administrative Services, and a building had been completed on Ace Drive in Berea for MEPCO, Berea Clinic, and the Community Health branch.

In 1936, the director of the health department, Dr. Gradie Rountree, reported that Typhoid had become only a minor cause of death, and rarely was a patient hospitalized.  This success came from the health department’s employment of immunizations and sanitation measures.  Even though we are now in a new millennium, Madison County Health Department continues to employ immunizations and sanitation to prevent illnesses and to promote prevention as the key to the public’s good health.

Throughout the 80 + years of Madison County Health Department’s existence, our mission has been to ensure the health of all citizens in the county.  Recently added programs include Bioterrorism and Emergency Response and the HANDS Home Visitation Program for first-time parents.  MCHD’s staff has grown from a Health Officer and two Nurses to its current size of 150 full and part-time employees.  Despite this amazing growth, our focus remains the same, promoting public health and preventing disease.

After Hours, for Public Health and Environmental Emergencies Only, call 859-623-7312, option 8